Australian Dollar rises broadly in Asian session today following much stronger than expected job data. Expectation for RBA tightening is increasing with calls for a hike as soon as in August. Canadian Dollar is also firm together with bullish strength in oil prices. As China’s rate cut is lifting sentiment, Yen and Dollar are turning softer. Euro is also weak in particular against other European majors.

Technically, while Euro is one of the worst performers for the week, sellers are not too committed yet. EUR/GBP is leading the way down by breaking 0.8322 temporary low. We’ll now first see when EUR/CHF would break through 1.0324 low to resume medium term down trend. Also, break of 1.1284 support in EUR/USD would very likely resume the medium term down trend through 1.1185 low too. These two developments, if happen together, would be rather bearish for Euro. 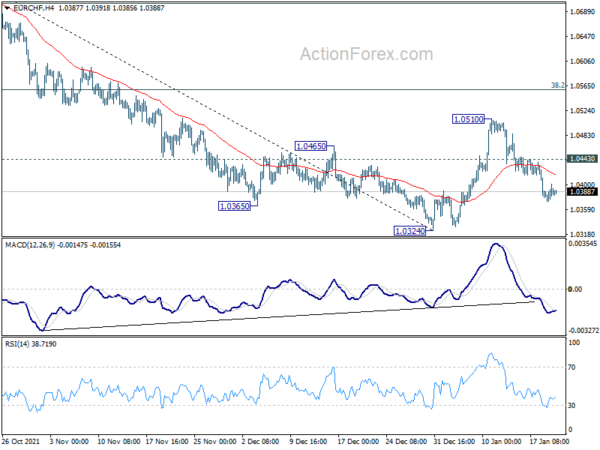 Bjorn Jarvis, head of labour statistics at the ABS, said: “The latest data shows further recovery in employment following the large 366,000 increase in November. This provides an indication of the state of the labour market in the first two weeks of December, before the large increase in COVID cases later in the month.”

The bigger question now is whether the medium term fall from 1.1042 has completed as a corrective pattern, with three waves down to 1.0278. Break above above mentioned 1.0851…

DePaul loses by a point to No. 20 Xavier

Fantom has become a very interesting blockchain, as it expands in the DeFi (decentralized finance) space within the crypto...

A recent comment by the Governor of the Central Bank of Nigeria, Godwin Emefiele, caused sparked a shock in...

EURUSD trading above and below 1.1400 as traders ponder what next after the

EURUSD traders ponder the next move The    EURUSD  EUR/USD The EUR/USD is the currency pair encompassing the European...

Hang Seng Index May Embrace a Rebound After a Prolonged Consolidation

U.S. Dollar Is Mostly Flat Against British Pound GBP/USD is currently trying to settle below the support at the...

Jim Cramer discusses Wednesday's earnings reports and what it means for