Protesters opposed to Covid-19 vaccine mandates and other restrictions withdrew their vehicles from a key US-Canadian border bridge on Saturday, although access remained blocked.

Meanwhile, other demonstrations ramped up in cities across Canada, including the capital, Ottawa, where police said they were awaiting more officers before ending what they described as an illegal occupation.

The tense stand-off at the Ambassador Bridge linking Detroit and Windsor, Ontario, eased somewhat early in the day when Canadian police persuaded demonstrators to move the trucks they had used to barricade the entrance to the busy international crossing.

But protesters reconvened nearby – with reinforcements – and were still blocking access from the Canadian side, causing traffic jams and disrupting commerce for a sixth day. About 180 remained in the sub-freezing cold late on Saturday. 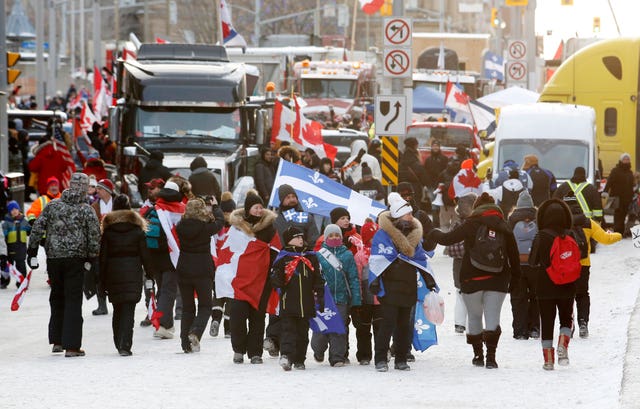 In Ottawa, the ranks of protesters swelled to what police said was 4,000 demonstrators. The city has seen that on past weekends, and loud music played as people milled about in the city centre where anti-vaccine demonstrators have been encamped since late January.

Early on Saturday evening, crews placed concrete traffic barricades behind a line of police officers that stretched across the main highway leading to the foot of the Ambassador Bridge in Windsor. Officers later withdrew behind the barricades which separated them from protesters.

Barricades were also placed along some side streets. Police vehicles had been parked in those streets, preventing motor vehicles from entering the highway.

The protests at the bridge, in Ottawa and elsewhere have reverberated outside the country, with similarly inspired convoys in France, New Zealand and the Netherlands, and the US Department of Homeland Security warned that truck convoys may be being planned in the US.

An ex-cabinet minister in Canadian Prime Minister Justin Trudeau’s government took the unusual step of calling out her former federal colleagues as well as the province and city for not putting an end to the protests.

“Amazingly, this isn’t just Ottawa. It’s the nation’s capital,” Catherine McKenna tweeted. “But no one – not the city, the province or the federal government can seem to get their act together to end this illegal occupation. It’s appalling. … Just get your act together. Now.”

Mr Trudeau has so far rejected calls to use the military.

“The Prime Minister stressed that border crossings cannot, and will not, remain closed, and that all options are on the table,” his office said in a statement after he met senior officials.

Mr Trudeau has called the protesters a “fringe” of Canadian society, and both federal and provincial leaders say they cannot give police…

A Trusted Name in the Food Industry – News

The source said the Archives is seeking a review of whether Trump violated the Presidential Records Act, which requires...

A Trusted Name in the Food Industry - News